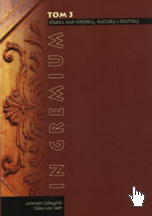 Views by dr Wiktor Skarżyński, a deputy to Parliament, a philosopher - a representative of the conservative movement -on social and professional women's activity in Wielkopolska in the second half of the 19th century

In the second half of the 19th century, as a result of complex social, legal and economic determinants, there grew the interest in the position of women in many spheres of life. Wielkopolska was not an exception although the Kulturkampf policy had assigned to women an important role of guards of the national identity and Polish tradition. Traditional and conservative views of that time did not prevent the undertaking of a current discussion. Many social and political authorities expressed their views on that subject. One of them was dr Wiktor Skarżyński - a politician, a philosopher, and an economist. Conservative as they were, his views underlined the enormous significance of women in the social life, their role in patriotic attitude's creation, preservation of the mother tongue and the sense of national bond. He enumerated the following resources available to women; skillful home management, thorough, pragmatic, religious and patriotic child education especially with reference to their daughters as future mothers. These views did not account for the economic situation of many families in Wielkopolska forcing women to take up employment or some form of earning money. These views referred mainly to women from so calłed higher social cłasses and were applicabłe to a lesser degree to women earning their living.