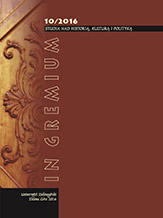 OF ETHICAL HEROISM AND THE IDEA OF ACTION-WORD IN DO POTOMNEGO POEM BY TADEUSZ GAJCY
Tadeusz Gajcy in his mission-statement article: O wawrzyn, referring indirectly to Norwid’s conception of the idea of “action-word”, emphasized the educational aspect of literature, which, in the context of his own creative practice, denoted the hope of raising the human future in a fraternal spirit permeated by the ideas of humanism. What picture of man emerges from this poetry then? Will such a life attested by life attitude not seem a bit anachronistic usurpation in an era of postmodernism and cognitive relativism, also in the sphere of values? Besides, the question of the reception of this work applies to the subsequent generations of Poles. Could the poetic vision instil in them the idea of patriotism mounted on a  foundation of human values? With this hint of uncertainty, emphasized by the particle “probably”, the poet asks the child of all time, believing in the prospect of meeting space the created by him and the lyrical words created by him, full of warmth and intimacy. Let us try to take a closer look at the image of the poet in: Do potomnego poem whose personal drama lay in the fact that while experiencing beauty as the epiphany of language, he himself was forced to live in the times when all human values were subject to
degradation, destruction and dehumanization.