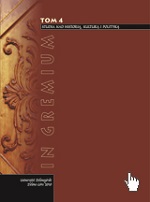 TRANSFORMATIONAL LEADERSHIP AT THE TIME OF EUROPEAN NON-VIOLENT (R)EVOLUTIONS
This article is devoted to the idea of transformational leadership within the context of European non-violent revolutions. It comprises of three parts.
The first one covers the idea of a revolution viewed as a sign of social change, but shown from both internal and external perspectives. There follows a discussion on various revolutions' concepts such as: behavioral, psychological, structural and political ones. The author further analyses the following factors: the motivation of revolutionary changes leaders, the dynamism of revolutionary events as well as the social support given to the non-violent revolutions in democratic systems.
Part two describes the definition of the transformational leadership as well as its qualities allowing to distinguish the transformational leadership from the transactional one. It further deals with the concept of transformational leadership by Burns and the theory of transformational leadership
by Bass, followed by a draft of 'the new leadership' together with its most significant element - the empowerment.
Part three refers to the characteristics of the leaders of political changes occurring in the late modernity period. This part concentrates on the following issues: the leadership situation, the dependence of the leader's activity strategy on the the type of activity situation, factors determining leadership success including the dependence of an activity on the time of the activity (the results of rime intuition ). There follows a discussion on the concept of uncertainty avoidance or the readiness to take on high risk applied by the leader.
At the end of the article the author discusses crucial attributes of leaders of positive changes.