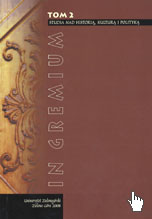 The Western European Enlightenment’s symbolic and material output, listed and selectively described in this paper (University in Wilno, schools, publications, architecture, collections, private theatres, attempts at local reforms, etc.), did not appear all of a sudden in the XVIII century before the 830s: it all stemmed from the long-continuing march of the Western European culture into the Lithuanian and Belarusian territories, especially since the Reformation. The clash of the Latin culture and the Byzantine-Russian (Orthodox) culture brought about their mutual penetration. The popularisation of religious and secular literature in the – mainly – Polish language, as well as the extraordinarily fruitful Baroque period, pushed

the civilization frontier farther east – to the Dźwina and Dnieper rivers. The differences – especially between Russia and its western neighbor – began to mount.