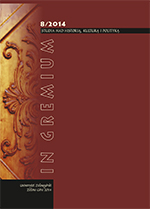 In the years 80-71 BC in Spain played out a fierce war between the rebellious Marian governor, Quintus Sertorius, and Senate commanders, Q. Metellus Pius and Cn. Pompeius. An important issue for both sides during this conflict was to gain sympathy of local peoples and one of the elements of such a policy was giving the Roman citizenship to the population of the province.

In the first part of the article the author considers the possibility of granting the Roman citizenship by Sertorius to representatives of the Spanish aristocracy. The Author does not deny this possibility, but he draws attention to the fact that the Marian governor could not abuse this privilege because he had to bear in mind the real possibility of fulfillment of promises made.