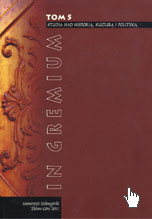 As a result of the Round Table Agreement and the ełecrion of 1989 Połand appointed a noncommunist government led by Prime Minister Tadeusz Mazowiecki. The changes occurring in Poland were noted by the authorities of the Federal Repubłic of Germany. They were willing to make various reconciliation gestures but were avoiding any binding declarations when it comes to recognizing Połand's western borders. Postponing, for tactical reasons, any decisions in this matter by Germany
caused the increase of uncertainty and anxiety in Polish society. This issue was linked by chancellor Helmut Kohl wich the probłems of uniting the German country. Thus, wich the support of the well-known German politicians representing both the Social Democratic Party and the Christian Democratic Union, he could not only neutralize the environment of the Federation of Expellees but also introduce appropriate legal solutions to this matter that would satisfy their Polish neighbor.